The Metropolitan has been strongly recommended and raved about by Mr. Brian Goulet of the Goulet Pen Company (see Ink Nouveau videos here and here). In his 2012 Youtube video Mr. Goulet said that it would become "known as one of the best starter pens out there in the fountain pen community". In my humble opinion, I think his prediction was spot on.

See also The Pen Habit's Youtube video here, where he goes into detail of his dislike of proprietary converters, which I do agree with to a certain extent - I will talk more about this later below.

Lastly see also Peninkcillin's very detailed review here (where there is a comparison between the Prera and a "M" Nib and "F" Nib Metropolitan).

When I first started getting into fountain pens, I had heard so many good things about the Metropolitan, i.e. how cheap and solid it was, and how smooth it wrote. I had wanted to get one for the longest time, but it somehow was never one of those pens that I "hunted" for. It was more of a "if-I-see-it-I'll-get-it" type of pen for me personally. I wasn't excited about getting it, but somehow I felt that no respectable novice fountain pen aficionado could call his collection complete without a Metropolitan. 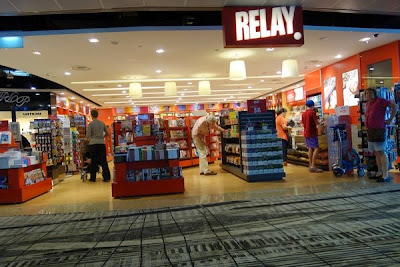 (photo from Yelp.com, but I believe this is the Terminal 3 outlet)

I bought it from Relay Bookstore in Changi Airport's Departure Terminal, Terminal 2 (only accessible after you've passed through immigration) for S$30 (on GouletPens.com it is going for US$15). I was able to get it on a recent business trip to China.

I think it would be an appropriate point here to say too that the Relay Bookstore in Changi Airport Terminal 2 is FANTASTIC because:

(b) Impressions and Nib: 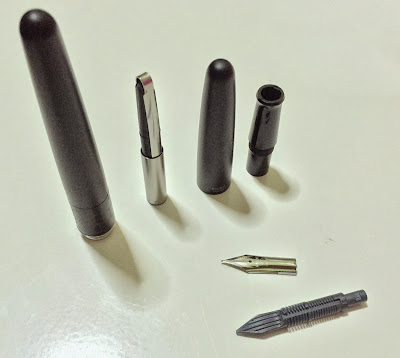 I have to confirm what a lot of other bloggers / vloggers have already said about the Metropolitan; it is great value for money (it comes with a squeeze converter), it feels great in the hands (comfortable with a healthy heft to it) and it writes smoothly.

My Metropolitan came with a Japanese "F" (fine) nib, which makes it an "Extra Fine" nib in comparison to other continental / western fountain pens. For me, this has been great because I had been looking for a very fine pen for awhile to stave off feathering on cheap paper. Currently this is the thinnest / finest nib that I have in my fountain pen collection (see writing sample below). 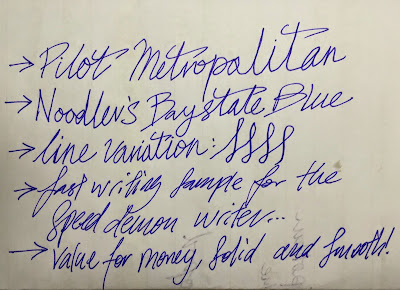 "Black Crocodile" and the body of the pen is made of metal and coated with a matte black paint finish. The cap is a snap-on one, and the pen is tapered at both ends. Undeniably, this is a sleek looking modern pen.

(e) What I Dislike about the Metropolitan: 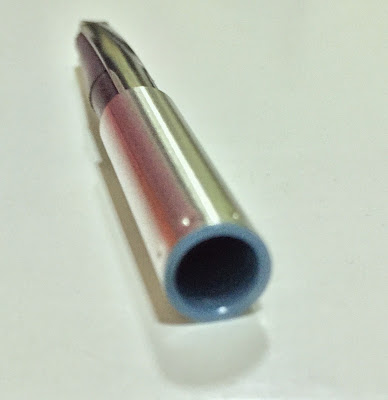 Only really 1 thing; the proprietary squeeze converter that it comes with, which is opaque.

You can't see how much ink you have left in the converter, and as I've mentioned several times this really, really, really irks me. I hate not knowing how much ink I have left in my pen before I take it into a meeting with me and with this converter there is no way that I can check; even if I were to open the barrel up and take a peep inside the pen.

Also, in a regular twist converter (like any other regular standard international converter) it is easy to give it a little twist to push ink down into the nib and feed to saturate it when the pen is a tad bit dry. However, you don't often have that level of precise control (i.e. how much or how little you want to saturate the feed) with a squeeze converter. As has happened to me, I have accidentally squeezed too hard and had a drop of ink drip out from the feed and nib.

At the moment I have the squeeze converter swapped out for a regular Pilot ink cartridge (and which I am hoping to be able to swap out for a CON-50 one day soon, for more information on Pilot Converter's see the GouletPens' blog post here), which I got from a Pilot Hi-Techpoint V5 pen (see picture above). At least now I can monitor how much ink I have left since the cartridge is transparent.

This is also an opportune time for me to segue into the other cool discovery I stumbled upon while I was in China!

In Singapore the Pilot Hi-Techpoint is as common as dirt.

I dare say that every single office in Singapore would have at least 1 (if not a 100) of these. However, all the ones I have ever seen are disposable (see picture below, i.e. where the ink is enclosed in the body of the pen itself and which will have to be thrown away once the ink has been used up), and I have never seen one with a refillable cartridge system! 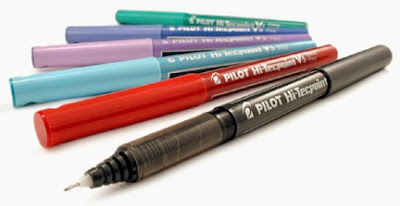 I was able to convert one of them to an eyedropper with the same "Platinum Preppy" trick; silicone and a rubber o-ring (see picture below). Which is super cool too since it comes with a little clear window for you to monitor when your ink is low!